Steve Morse is one of the most recognizable names in guitar excellence around the world. As the lead guitar player of Deep Purple and the founder of Dixie Dregs, Morse's signature style, versatility and influence has made a massive impact upon millions of guitar players for more than five decades. Morse's solo work is also the stuff of legends, as he has crafted a remarkable catalog showcasing his guitar wizardry with a sound that is all his own. With the Northern Lights Collection, Steve Morse enters into a new dimension of creativity, as he is unveiling visual artwork built from his performance on the fretboard.
Close

The Northern Lights Collection has been several years in the making. The project, which began prior to the Pandemic, brought guitar legend Steve Morse into the studio with art team SceneFour to craft visual art in a unique way.

To execute, the guitarist was outfitted with a customized glove that tracks his movement on the fretboard with light. As small increments of performance are captured, Morse is able to create fine art landscapes fit for the canvas.

The result is a remarkable collection of 5 different works that take what was once only heard into the visual realm. All pieces in the collection are numbered and individually signed by Steve Morse and SceneFour. All are available worldwide. 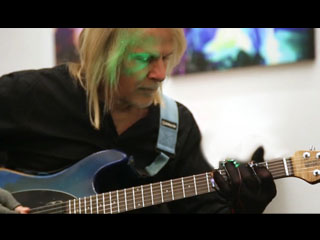